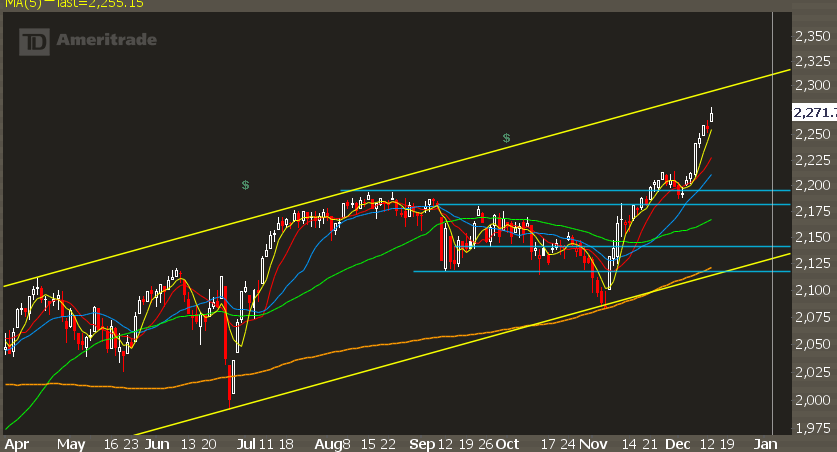 Get out your party hats.

It’s the last Fed day of the year.

From the pricing in the Fed Funds Futures market, it looks like they’re going to hike rates.

We’ve already seen the reaction in the markets for weeks now. Stocks that get hurt by rising rates have sold off, and vice versa.

We’ve also seen a very strong rally in the market into the event.

This feels like… not necessarily a “sell the news” event, but it’s going to be difficult for the market to rally further from these levels without some kind of a correction/pullback.

So the strategy right now is to start looking for pullback areas in strong stocks, and also looking for parabolic longs *if* some stocks that haven’t participated in this rally really start to roll over.

Very clean breakout with its earnings pop as the initial catalyst. It’s been in an uptrending channel for about a month and has overshot the upper end of the range.

I don’t think this is a short, but instead we need to look for places where the risk/reward is optimized.

145 is where the rising 50 day moving average sits, along with two major pivot levels from the past month. The idea here is that the “obvious” trendline would be broken, brining in more stops and causing a quick momentum shift down to 145.

If that happens then we can look to some put spread sales to earn some profits.

BABA has not participated in this market rally… at all.

Now think about this if you’re an investor headed into the end of the year. Do you really want a loser on your books?

A sustained move under 90 could trigger that kind of psychology and have the stock run to 82.50. If we come into those levels then I want in on the action.

Now it’s possible that 82.50 never gets hit, and that’s fine… we just want to make sure if it does hit, we’re prepared.