I’m excited to have you as a member of Full Time Profits, and I look forward to trading credit spreads with you in 2017. There’s always opportunity in the market so let’s take advantage of it!

Markets broke some key short term support last week. I’m not sure if this is a headfake because it was holiday trading… but we aren’t yet properly oversold.

A good retracement would take us back to test 2200, which is previous resistance and potential support. There is also a rising 50 day moving average that may attract buyers.

Now this is one of those that will probably not be a “textbook” retracement.

Instead, we may find that the level is never touched or it overshoots. It’s not going to be as clean as what the textbooks show.

Trade strategy here is to look for stocks into key levels that could get there sooner than later. They also need to have exhibited relative strength in the past so that if and when the market turns back up they will be the first to stabilize. 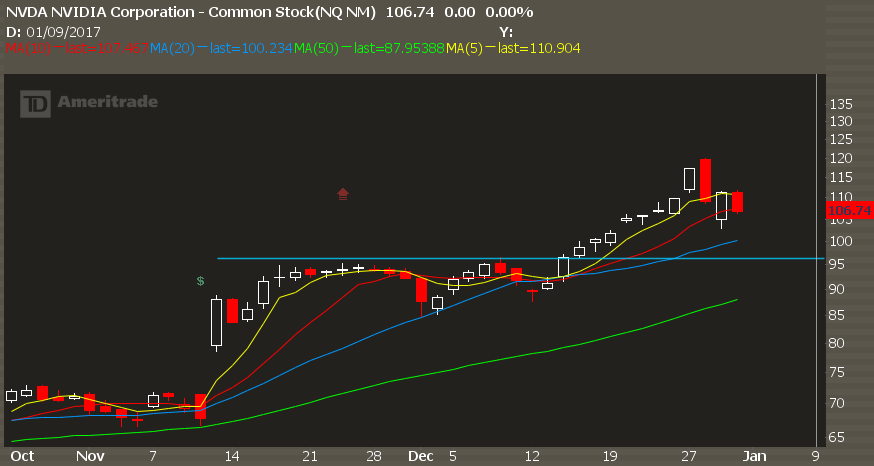 NVDA… I mean what can you say about this stock?

Short term, the top is probably in. It has put in a bearish engulfing candle and volatility expansion to the downside. Look for a lower low and 100 to act as a magnet, then for buyers to ste up into that level.

This has already been mentioned, yet the setup bears repeating.

Since the massive run started in November, this is the first proper pullback seen in this stock.

Now it did gap down on earnings, and we have seen the second leg lower. This is a setup I call a ‘post earnings LL’ – where the stock is in a good trend but gaps down into earnings. You never want to fade the first down move but instead look for that second push as that tends to flush out the last of the weak hands.