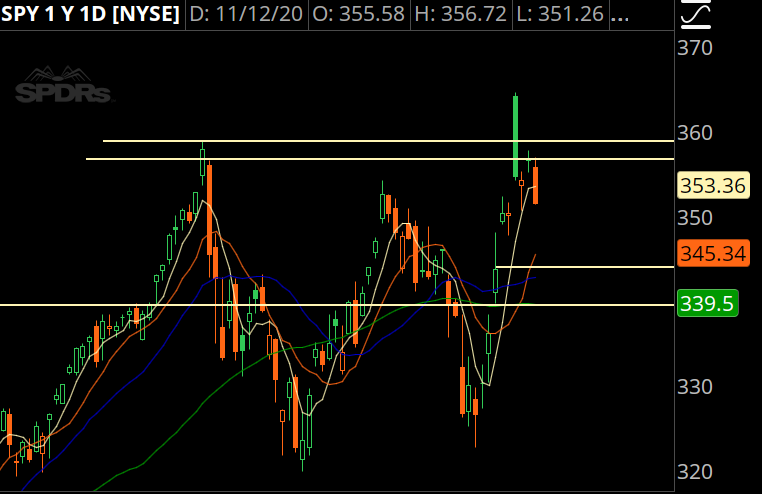 When the markets saw that massive gap higher on Monday, it was sold for the entire day.

Normally, when we see a range breakout that fails, there is a tendency for price to trade down into the other end of the range… that would be 3200 on the SPX.

I’m not sure we will easily see that. We might, eventually, but odds are it won’t be a “hot knife through butter” kind of move.

I’ve been wrong on that one before, and I’ll talk about the primary risk in a moment, but first let’s think of the risks that are getting cleared out.

First, the elections. Unless something truly comes out of nowhere, the presidential election is done, and that can get priced into the market fairly quickly.

There’s a senate runoff in Georgia that markets may start focusing on. Remember– markets have a tendency to attach a narrative to price action only after the move has started. See the selloff in ZM and how it happened before the vaccine news came out.

But that’s a ways off, and we’ve got other near term risks the market is currently focusing on.

The next risk is going to be in a fiscal deal… if it ever gets done.

We’ve seen plenty of times in the past where the stock market will throw a “temper tantrum” in response to a lack of fiscal or monetary policy. Oct-Dec 2018 come to mind, as does the “taper tantrum” in 2016.

The longer we go on without any fiscal stimulus, the higher the odds that vol will continue to pick up.

Third risk is the disease-that-shall-not-be-named. You know the one, and I’m trying to not say the name so this note can reach your inbox easily.

The ‘rona is in a family of viruses that exhibit a clear seasonality, and this has been known for a while. It’s not a surprise that cases are starting to pick up in Europe and the Northern US.

If the lockdowns increase, then that will combine with the lack of fiscal stimulus and can create a “tantrum.” That’s how we can see hot-knife-through-butter price action.

Have I got you good and scared yet?

All the election hedges that investors put on are still on. That means downside can be capped as these hedgers start to unwind their positions into any further selling. When that happens it can create a natural floor in the market as we go back into balance.

UBER had a monster run post earnings that was punctuated by a blowoff top on Monday. I’m looking for a full gap fill from Friday’s close as a place to start a position. 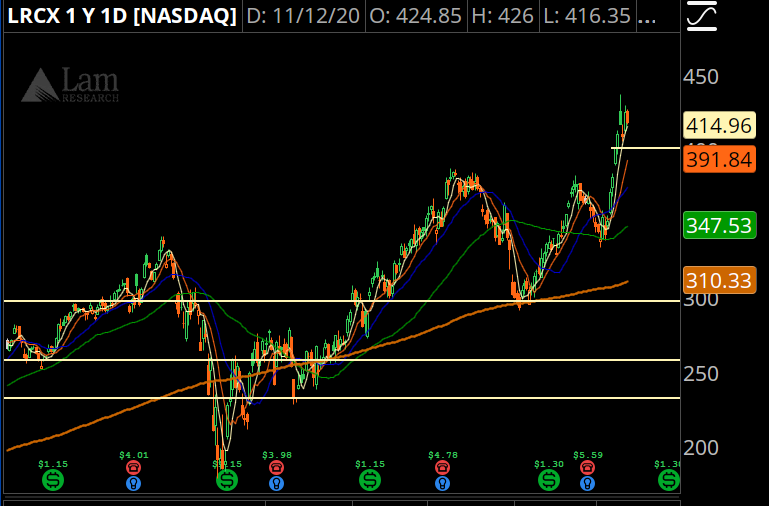 Along with the rest of the semiconductor space, Lam had a nice move higher. We’ve got a gap fill and previous resistance in the 380s as a place to start from. This one is a little less liquid, so please double check prices as we come into that level. 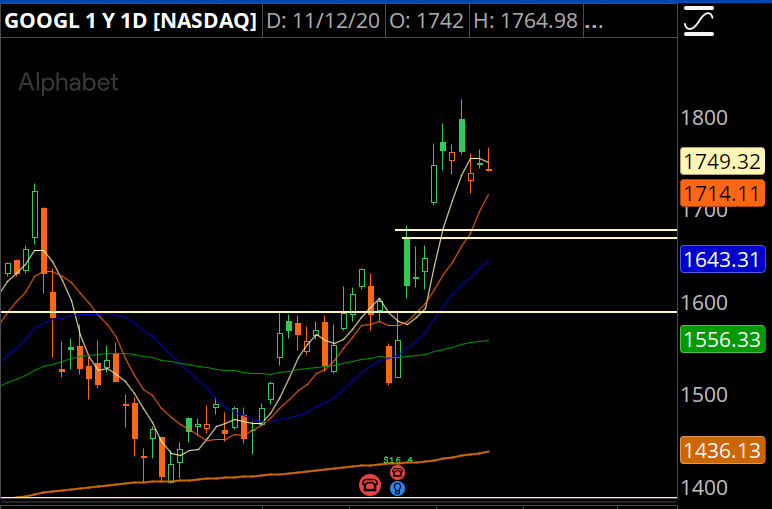 This setup in GOOGL is probably wishful thinking, but I’m looking for a test of the earnings high and the rising 20 day moving average.