Market volatility has picked up, with the VIX spiking, VVIX spiking, and 2% moves both to the downside and upside. SPX saw a clear breakdown and is retracing right now. This could be a one off event, but usually the market will knock out some kind of an “ABC” pattern where we get a new marginal low that shakes out the early dip buyers and weak hands before running higher. Look at the past few corrections for examples of this.

We’re not looking at new trade setups right now. Not necessarily because I’m expecting a crash, but simply because we’ve got a lot of positions on and I want to focus more on the active trade management around them.

Let’s just go through some of the current setups that are active with some added commentary. Remember, you can go back through past newsletters in the member’s area to see the original setups.

There’s a key pivot level right above 265 and if it clears it, then it should see trend continuation and we’ll be able to exit out of the trade for a profit. Current exit price would be around 280, which would be a retest of the swing highs from a few months ago.

TSLA stayed relatively weak today while the rest of the market ripped higher. I wouldn’t be surprised if we saw a push underneath the recent capitulation lows at 540 and a retest of the pre-split highs at 500. We will be scaling in throughout that.

Tier 2 was filled today, so make sure you’ve got your exits planned. A tier 2 exit at 0.59 would require the stock to move to about 670, which is very possible given the kind of volatility the stock sees. If volatility goes reverts from 70% to 60%, then we would only need to see a push to 630… so somewhere between those two is when we should expect an exit.

The tier 3 fill would be around 530. If you wanted to add a little discretion and only add tier 3 on a test of 500, that would be a reasonable bet as well.

Strong bounce here after tier 1 was filled. I thought we’d pick up tier 2 on the trade yesterday but we needed just a little more. If you had orders floated out, maybe you got lucky as someone needed the hedge that you provided.

This is still in the leading sector– transports/industrials so I expect the overall trend to continue. We’ve got the 20 day at 293, and the 50 day at 282 that will help to support price on a deeper pullback. There’s also the gap fill that could happen, but if it does we will be stopping out with a loss.

DKNG is absolutely melting down as we’ve seen so many broken momentum trades with panicky price action. Our original entry was at 45, which was a good starting price, and if we get any bounce it should be pretty viscious.

If implied vol normalizes, then maybe an exit at 46. These are in August so don’t expect a ton of time decay, this is more of a straight directional bet. Make sure to use the natural volatility of the stock to scale in and out. There’s a very real possibility that you can re-enter tier 2 again if you take profits on it for the first round. 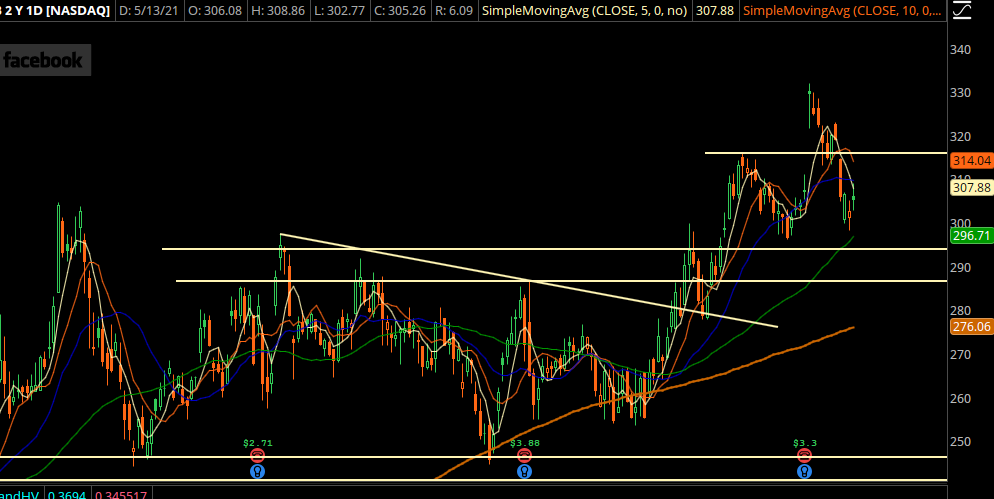 This one got very close to getting stopped out yesterday, and is one I’m a little concerned about given the time to expiration. I made the mistake of labelling these as May expiration instead of June. If you’re in May, then you need to be very aggressive with

You might have been filled on tier 3 yesterday, depending on how panicked the other side of the trade was. If you did, then you should be very ready to exit it on a further bounce.

If you got into May options, then you should be already out of tier 2 and 3 and sitting pretty. You can then look at june options if you want on just a bit more of a pullback.

If you’re in June expiration…

The tier 2 exit at 0.76 would require a push to 320… that’s ambitious. If volatility normalizes then an exit should happen around 314 which is doable and lines up with a key pivot level I’ve got going on.

Initial entry at 225 was pretty good. If you picked up the May options, then you should start scaling out into Friday as weekend time decay gets priced in. If you’re in June options, then you’ve got your scales set. Financials and financial tech is still a strong leader in this market, and the pivot level at 220 held… although it didn’t look like it yesterday. If it can retake 227 then the trend should continue and we should be fine.

This short idea was about .25 away from getting stopped out, but we managed to get a nice three day pullback.

It’s been very difficult shorting the front side of these parabolic moves as they are stretching further and faster than I think– there might be something with respect to leveraged funds jamming the stock higher, like what Archegos did with BIDU and VIAC recently.

This trade setup looks backwards initially because of my expected profit taking percentages that make it look a little off.

This one was with May options. Into that most recent pullback you should have been closing out Tier 2 and 3 for nice profits. If it makes a new closing high above 220, don’t be a hero and just close out Tier 1 for a loss and move on.

Trade looks fine, only Tier 1 is on for now. A lower low and we can easily capture tier 2 and flip it out.

This has earnings risk coming up, so if you want to close out early before the event, that would be fine. I’m not too concerned about earnings because HD already had it and those names sort of run together. After earnings we should see a vol crush and if the stock holds up we will be able to exit Tier 1.

There’s a few others– ADBE, NFLX are in June opex and look OK.

We had a trade alert in CHWY from April 6th where prices finally hit. If you did manage to play that, you should have bailed on some size back on May 11th. If you’re still in, keep a close eye on your risk.

Be very careful with any May expiration spreads that you still have on that are getting close. You don’t want to have a volatile event take you past your planned risk!

Have fun and stay safe,