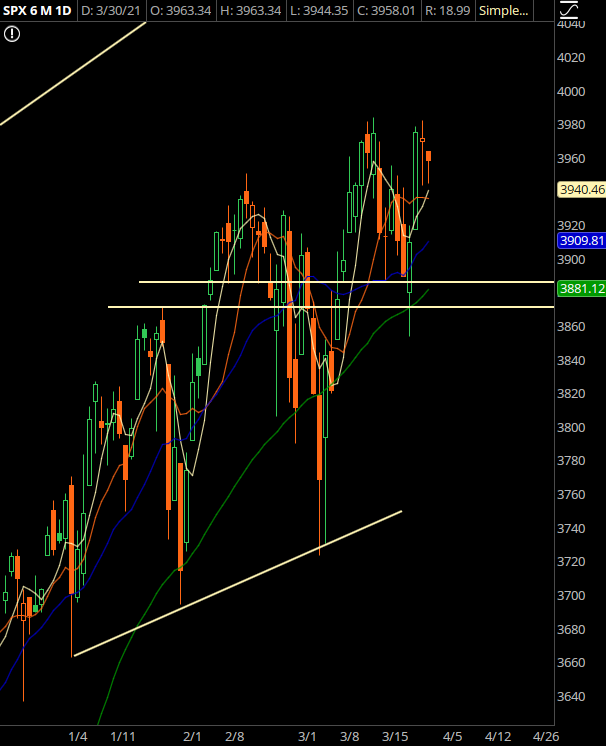 The rotational correction is still going on. S&P looks healthy due to having exposure to energy, industrials, and banks. Nasdaq looks "OK" and the Russell 2000 has a key support level that's holding... for now.

Yet there is a new class of investor/trader that doesn't see it that way. Their portfolios have been cut by a massive amount due to overleverage in tech momentum, pot stocks, solar plays, and whatever their chat room pumper sent them.

Those names look tragic, and they probably won't get off the mat for a while.

To bookend the most recent drama, we find out over the weekend that a family office is overleveraged in tech CFDs... to the point that it represents a systemic risk to some banks.

Now, I don't think that news is super bearish. In fact, the news coming out probably means that the bloodbath is about over. Names like BIDU and VIPS already were smashed, and now we have a narrative to attach to price action. 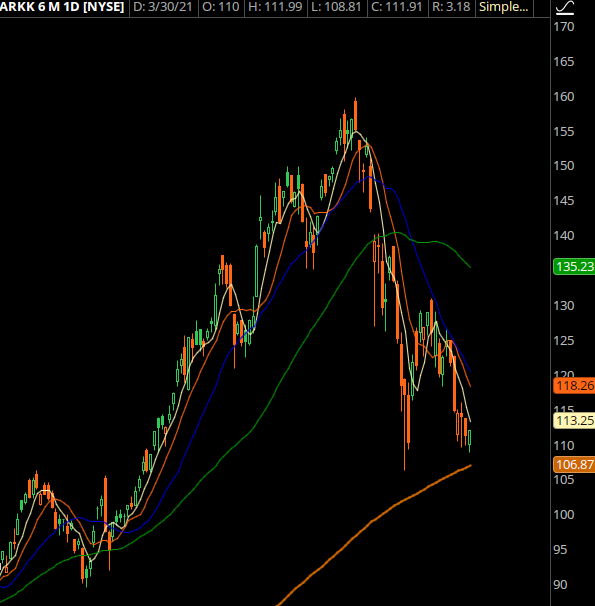 We're coming back into the impulse lows, and the rising 200 day moving average just at 110. My feel here is that we can break the most recent low, do a stop run, and reverse higher. This is a classic "momentum divergence" setup and we will start scaling in here and adding into that. 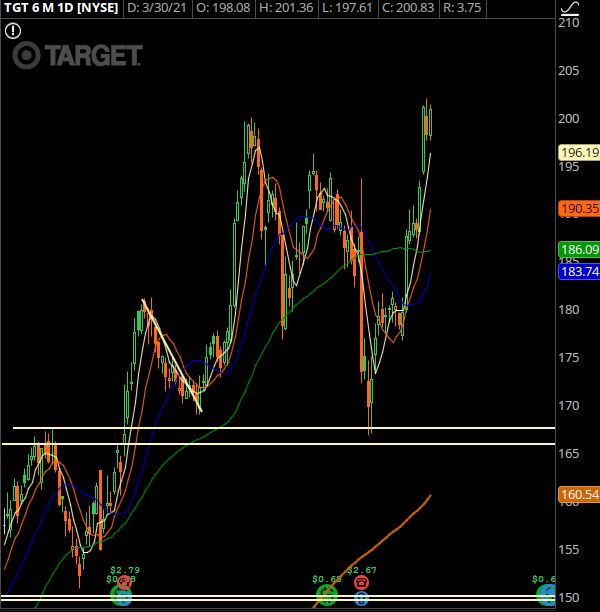 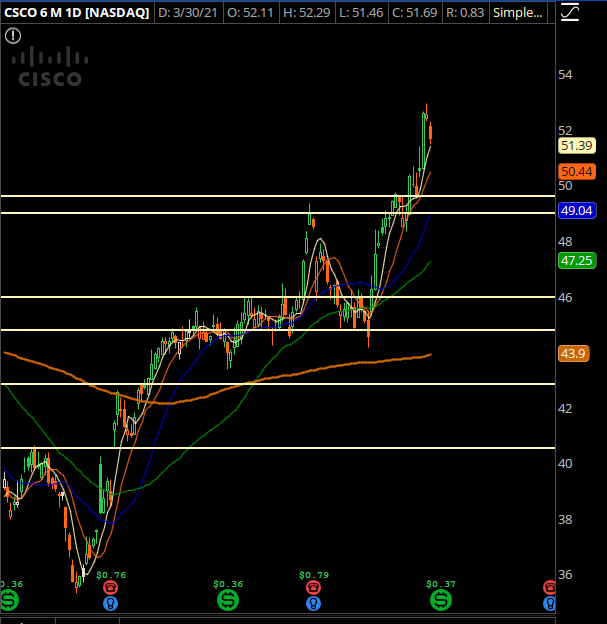 CSCO is another name that's hitting new local highs-- I'm not sure if it's all time highs because it's CSCO and there are levels back from 1999 that may be coming into play.

Either way, I want to play it on the first pullback. Due to the duration of our trade, there is the potential for earnings risk and we will keep an eye on it into earnings-- if we don't have enough of a cushion on the trade, then we will close out for breakeven to avoid that risk. 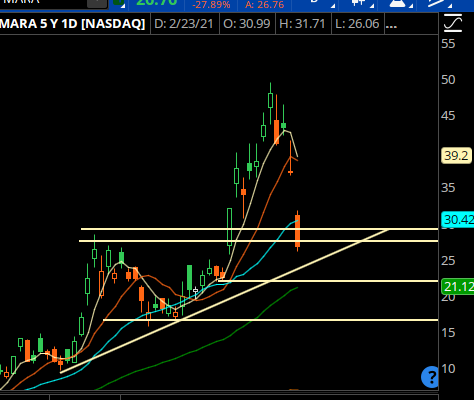 MARA is being taken to the woodshed with many other momentum stocks today. This is a crypto proxy play, so this plus RIOT and SOS and MVIS are all getting taken out.

With this move, investor fears are (justifiably) elevated, and implied are still running hot at around 200%. I think that this is a fade.

The technicals still look "fine." Odds are the stock won't see a gap fill to 40 anytime soon, and will just chop investors up to death.

Which is good--- that's what we want, we want to see bounces and selloffs and chop, all while our trade setup decays and we pull out a nice profit. 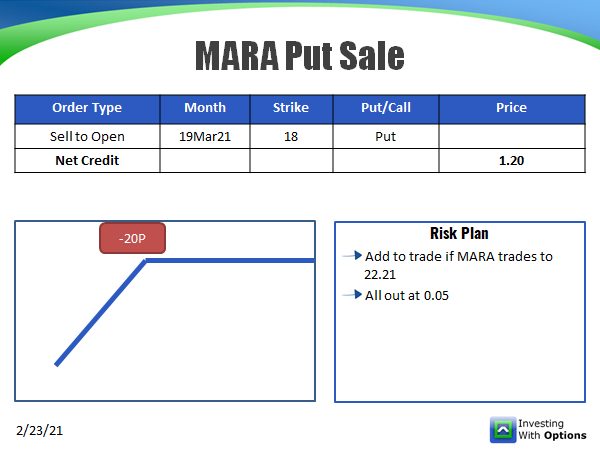 Pretty straightforward idea here, we are selling puts that have a nice cushion to the downside and offer some solid risk premium. I think today's nasty selloff may see a few more days of downside, so it's possible I'm early on this trade.

That's why I want to scale in-- I will add to this trade if MARA comes into the gap from Feb 5th-- that's in the mid 22's, and I'll look for just a bit more of an overshoot to the downside to add.

If things get nasty, then I can always roll the put sales down and out to April options.

If you want to keep your margin requirements down, then look at buying the 15 put against, making the trade a March 18/15 bull put spread.

From the Desk of Captain Obvious: 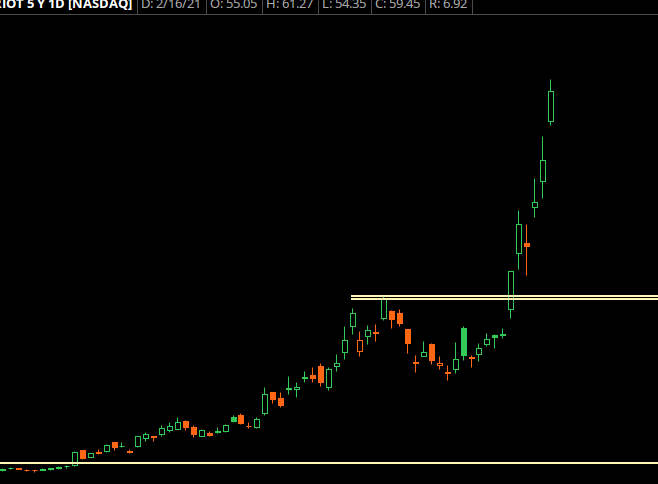 It's doubled in price over the course of about 10 trading days, due to its exposure in the crytpo space... the run to 50k in BTC is helping as well.

I want to put on a bearish trade, looking for... not a full round trip of the most recent rally, but a good giveback of the gains. This will most likely be coincident with a rug pull in BTC, and most likely a risk-off trade across the total trading environment.

I've been hesitant to get super bear-ed up into the front side of these rallies, but I think there is a good opportunity here if structuring your risk right.

Highlighted in yellow are the implied vols for the March options board. 240% is entirely too rich, and what will most likely happen here is what we have seen when these parabolic names start to give back their gains...

The IV gets crushed.

We saw this recently in TLRY:

That means, on a stock that went from 77 dollars premarket and got cut by 50% in 2 days... the put value increased only by 2 bucks. Not much there.

So that's the dynamic I'm looking for-- a hard stop run in the stock, but the March IV comes down while longer dated options stay bid. 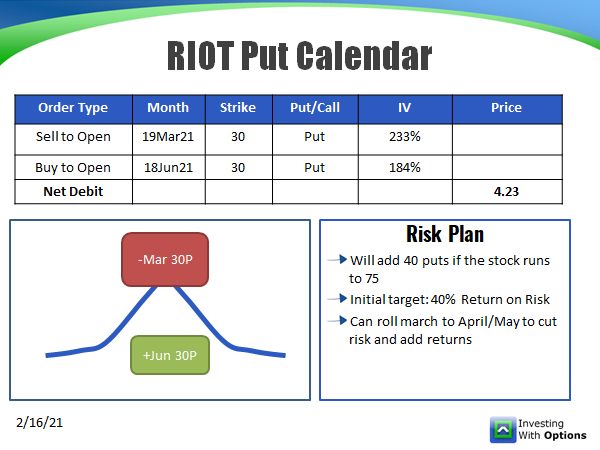 I paid 4.30 for the spread, and you can get a better fill if you leg into the trade.

This is a very elegant setup because it takes advantage of the current term structure in the RIOT options board.

And if we see a pullback, the implied vol in March will start to drop, and the Jun options will stay around the same IV, because longer dated options are not as sensitive to short term changes in IV.

Opex breakevens show 20 and 65, but those will probably tighten up over time.

If RIOT has some monster move higher and I completely miss the top on this, you will be shocked at how well this spread will hold up. When I did put calendars in TSLA's parabolic move, I was about 2 days earlier and the stock ripped higher... but we didn't see any change in the value of the calendar due to some options voodoo.

So I expect that this trade shouldn't have a ton of heat initially and we don't have to stress about the near term price action in the stock.

Now le'ts say the stock completely crashes and comes into 40... what I will then do is close out the long Jun puts and just hold onto the March puts naked... this will require margin, and you can buy a March put to cut down that margin.

Also, if the stock stays elevated for another month, I can just roll the short puts to April for a credit and continue to reduce the basis in the trade. 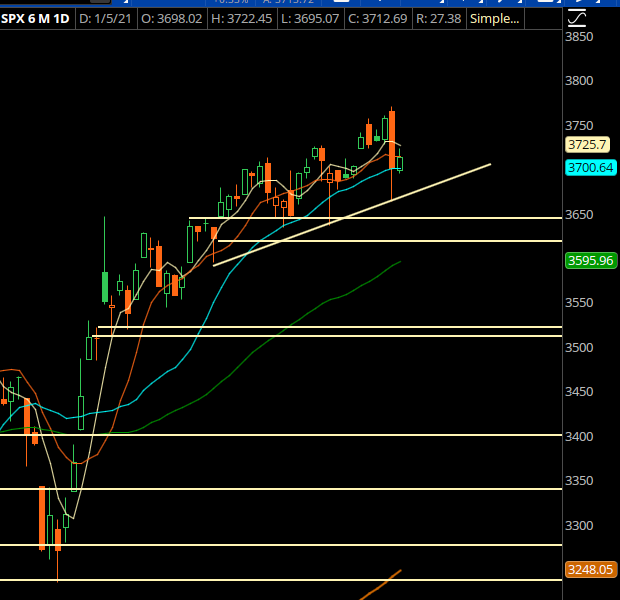 The S&P had another rug pull on Monday-- great way to start the new year!

Overall, things are "fine." The only major warning sign was the fact that Monday's range was more than a 2 standard deviation move-- when there are volatility pivots like that, there is a tendency for the "impulse" low to not be the final low. We could easily crack 3650, get a bunch of investors spooked, and start carving out the lower end of a range-based correction.

Or we could continue with the Q4 2020 playbook and it can be a one-off event as we jam to new highs.

For today, our focus will be planning for a few things.

First, we want to be ready for the dollar to hit a cycle low. It's extended, and any pop should lead to some reversion in commodities. We'll also be looking for rug pulls in two tech/momentum names. 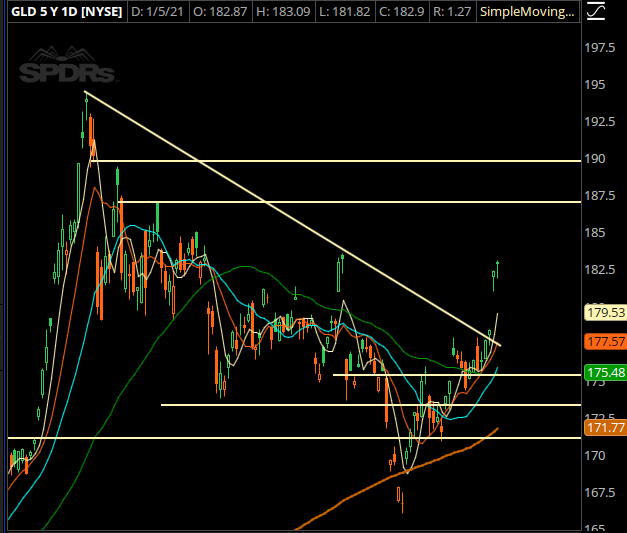 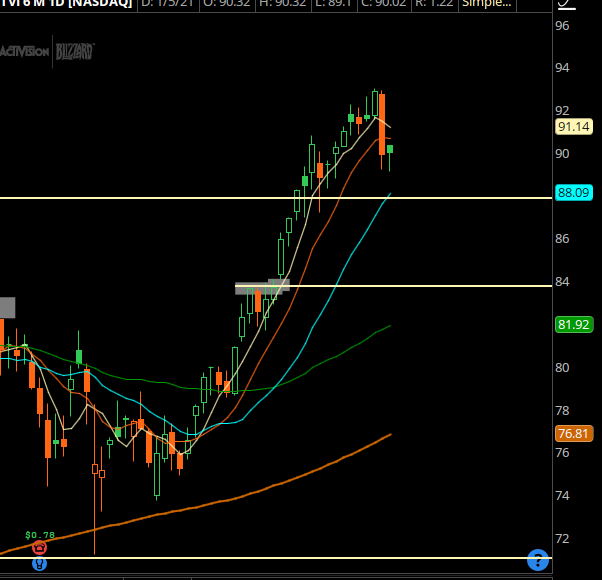 Looking for a pull to the 20 day moving average, prior resistance, and support from the candlestick wicks from 2 weeks ago. 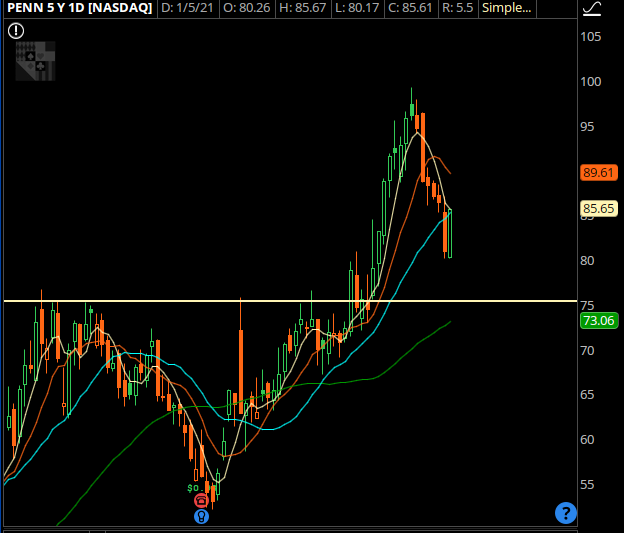 Looking for just a little bit more downside here. I may have missed the short term bottom, but if it goes on one last stop run to attempt a test of prior resistance, I want to be involved. 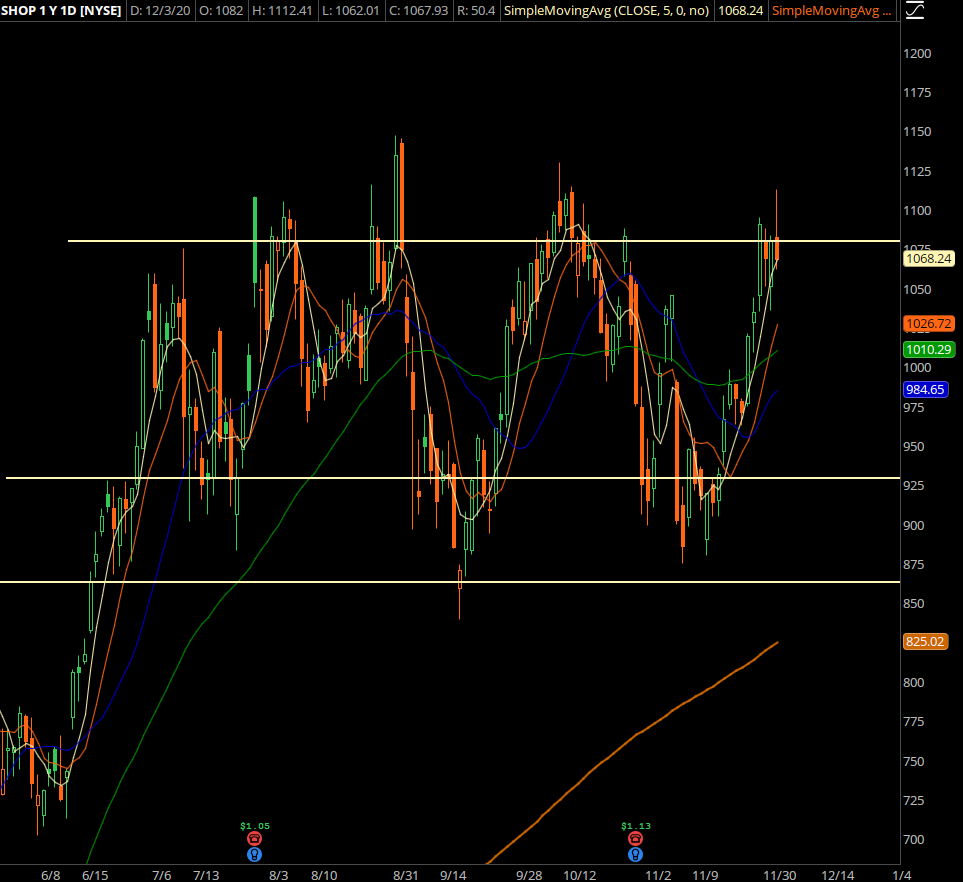 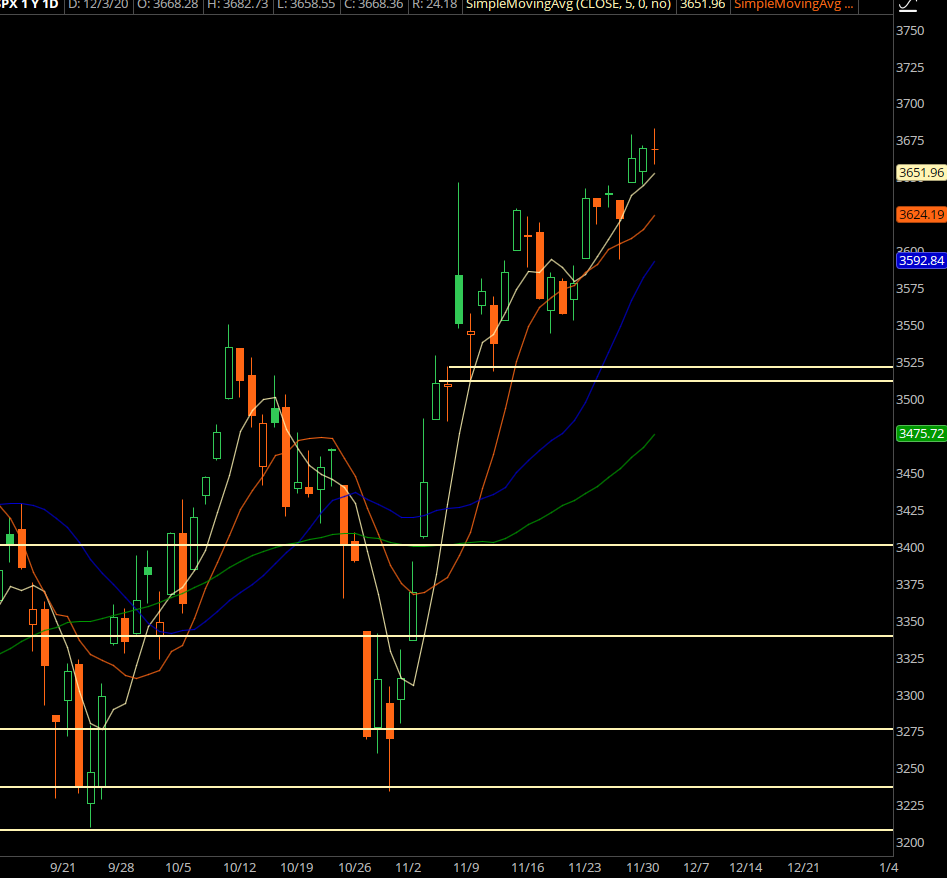 Not much has changed about the overall market structure. Unless we see proper price violations, we should consider the trend to be up.

There are some "hot spots" in the market right now-- semiconductors and commodity stocks come to mind-- so we may simply see a rotational correction. There is some risk right now as the PFE news came out about vacc*ne supply delays, yet if that doesn't cascade over the next few trading days it should be fine.

(Yes, I am censoring the word, just so I make sure this email lands in your inbox properly.)

Overall, try not to overthink this market. My bet is that corrections will be limited to pockets of the market, and volatility will continue to head lower as we come into holiday trading. 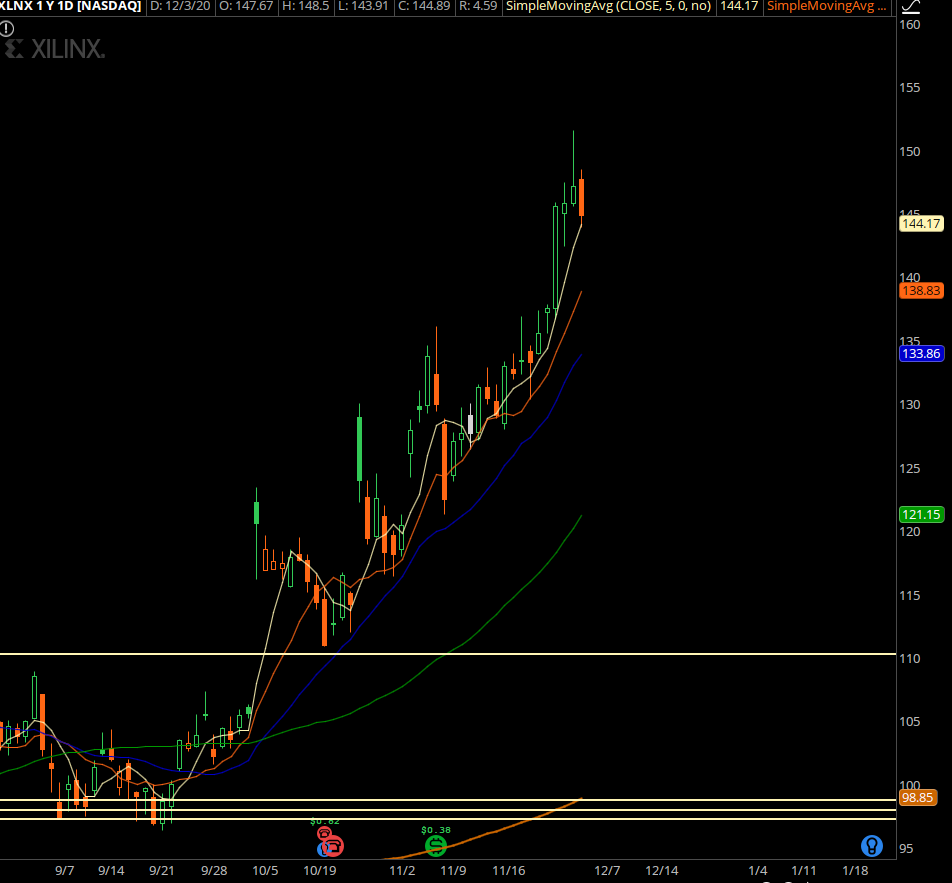 Very clean move over the past week, look for rotation lower as some other semiconductor companies take the lead. First dip in this stock should be a quality one. 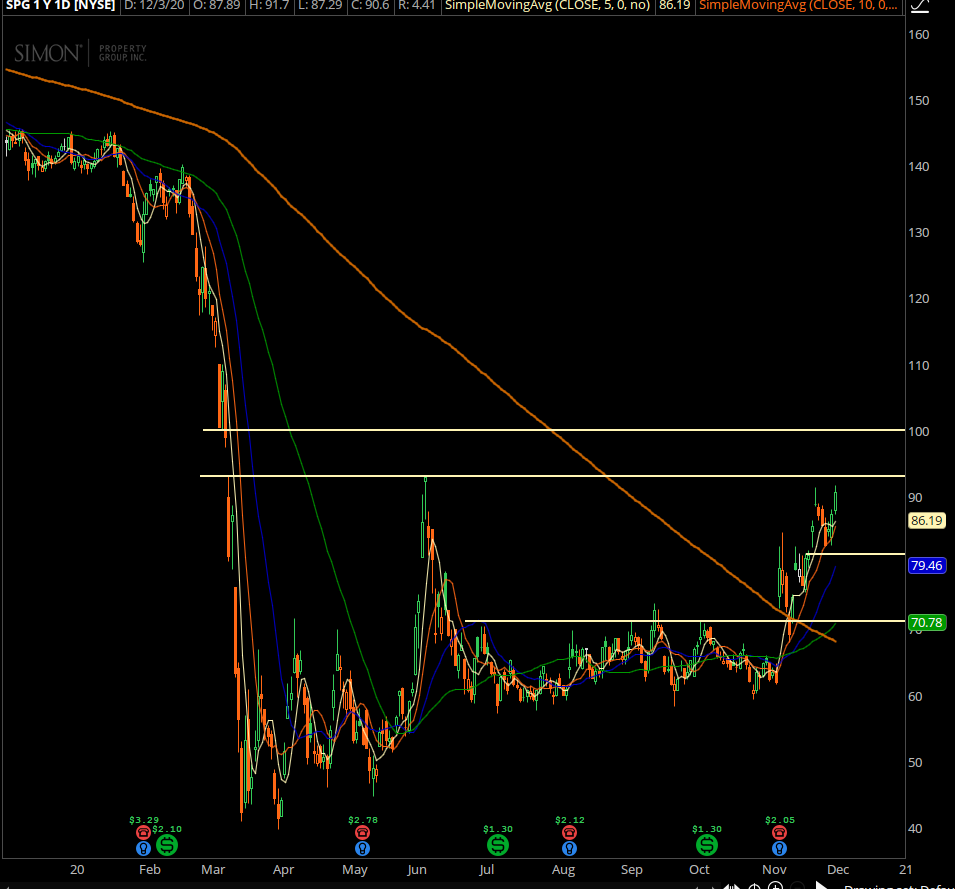 If commercial real estate gets another whiff of good news, SPG will jam higher and (finally) fill the gap from March. Once it does, I want to fade it.

Got a lot of eyes on this one, looking to chase a breakout. My guess is we need one more washout before the big move comes, and I want to be prepared to play the dip into key levels.