Refiners have been a great trade, yet there’s some evidence of waning momentum over the last three pushes higher. We’ve nosed over to new highs and found sellers there, so we will look to get a push back the lower end of the trading range that’s been developing since the beginning of May.

Another oil name, very strong. We are looking for a “pullback to breakout” setup which will line up with the AVWAP from the gap lows and the 50EMA.

Semiconductors have probably bottomed, and are coming into their first big levels. Look for a small pullback and play against the lower end of the range with our credit spread strike selection. 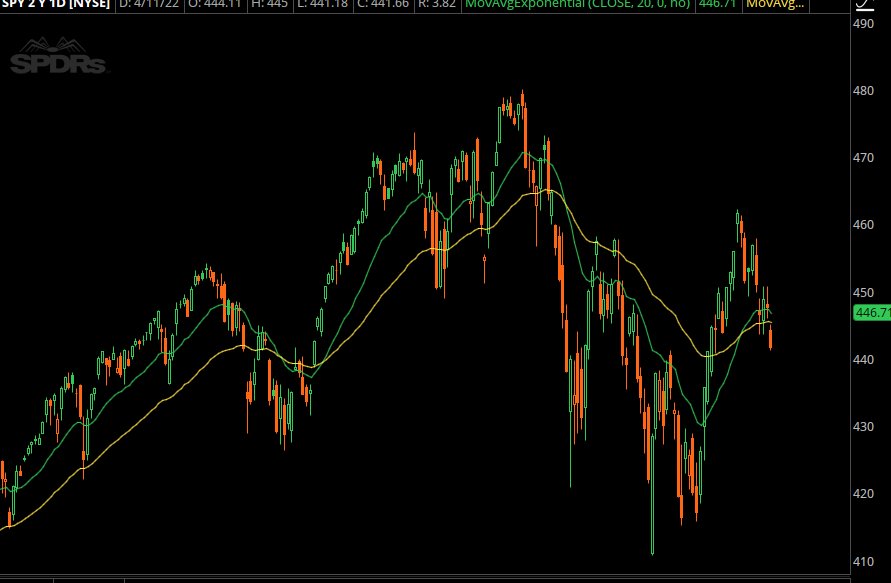 Markets are having a giveback of the most recent rally… and it’s been pretty tame all things considered.

First, the move higher was absolutely driven by enough inventory being dumped, and aggressive hedging. Once the VIX started to come in, then we saw an options-driven squeeze higher back up to 460.

Right now we are seeing more rotational corrections, with financials finally seeing a bid while mega-cap tech names like TSLA are finding some sellers.

It’s always possible that the market just completely falls apart here, yet I think that the base case is still more for a rotational range play.

We have a monster CPI number up on deck tomorrow, and the Feds are already warning about it ahead of time. We’re close to an inflection point in the bonds/commodity trade, and that’s where our focus will be. 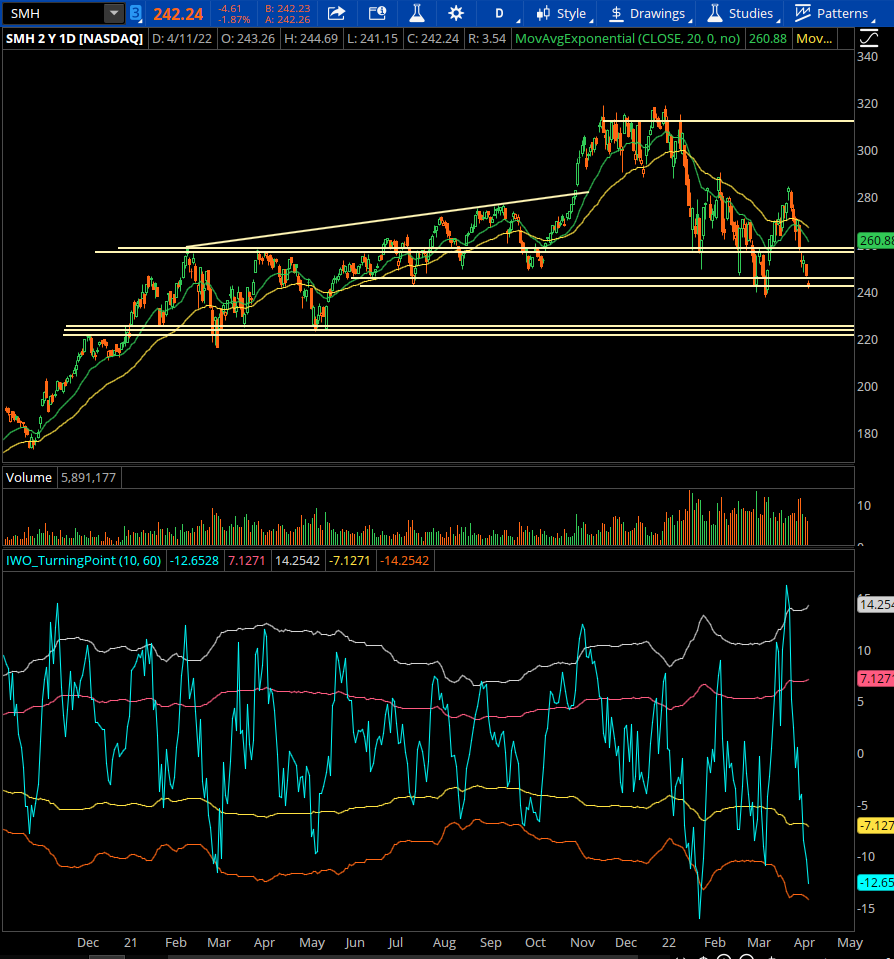 Semis are off 12% in 10 days, something that doesn’t happen very often. It does have some support coming into play here… the main concern I have is that it’s retesting the lows now while the rest of the markets are holding up a little better.

I’d rather miss the trade than be entirely too early, so I will target a recent undercut of the lows and will scale in as SMH comes into the next support level in the 220s. 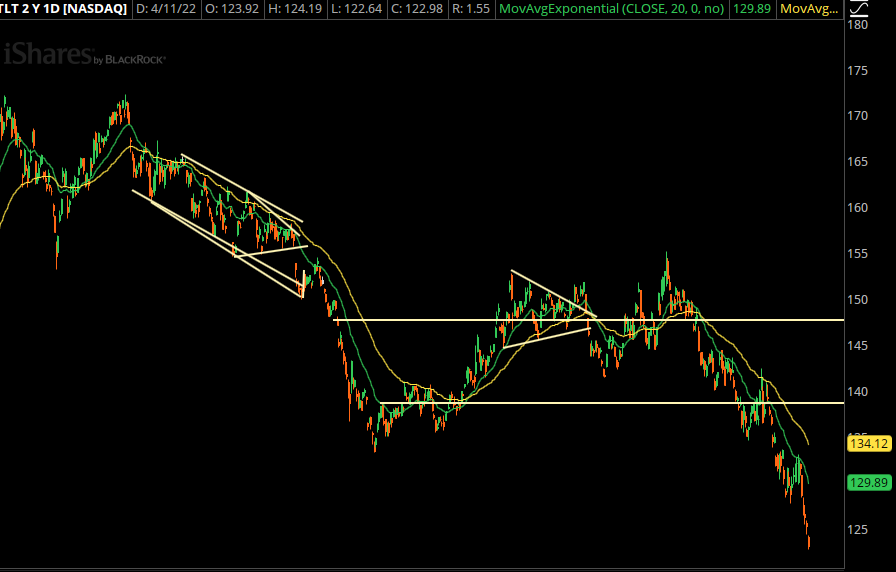 The long bond trade has been completely destroyed due to inflationary expectations, and TLT is very stretched… again.

I think we’re coming into a key inflection point with the inflation narrative, where a ton of macro developments are being priced in, and we have entirely too many people leaning in the same direction.

We traded this well on the most recent dip in TLT with April spreads, and we will look to do something similar out in May. 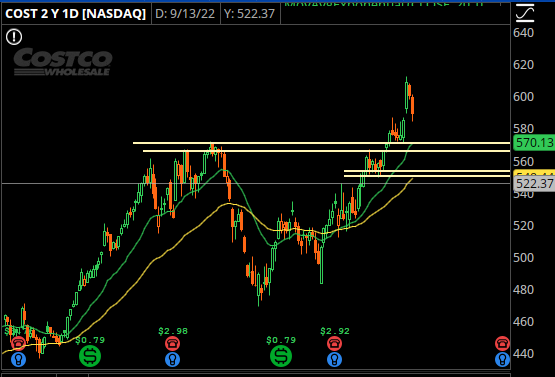 COST is one name that has earnings off-cycle so we don’t have to worry about that through May opex. We just had a great sales number come out, but we’re seeing some give back on this. I wouldn’t be surprised if it trapped some longs, and the early dip buyers into prior resistance get stuffed too, so we will target the range underneath that at 560. 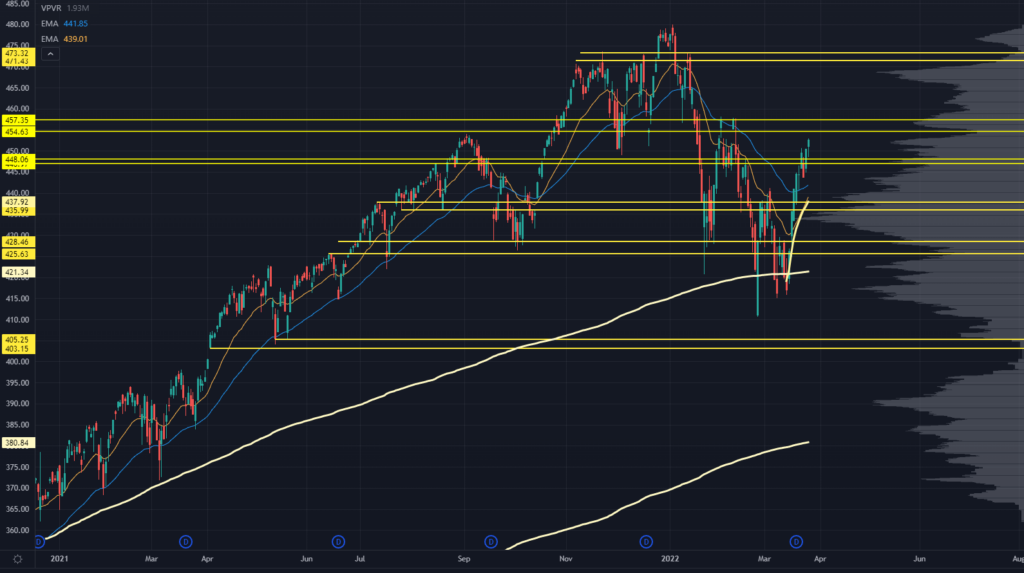 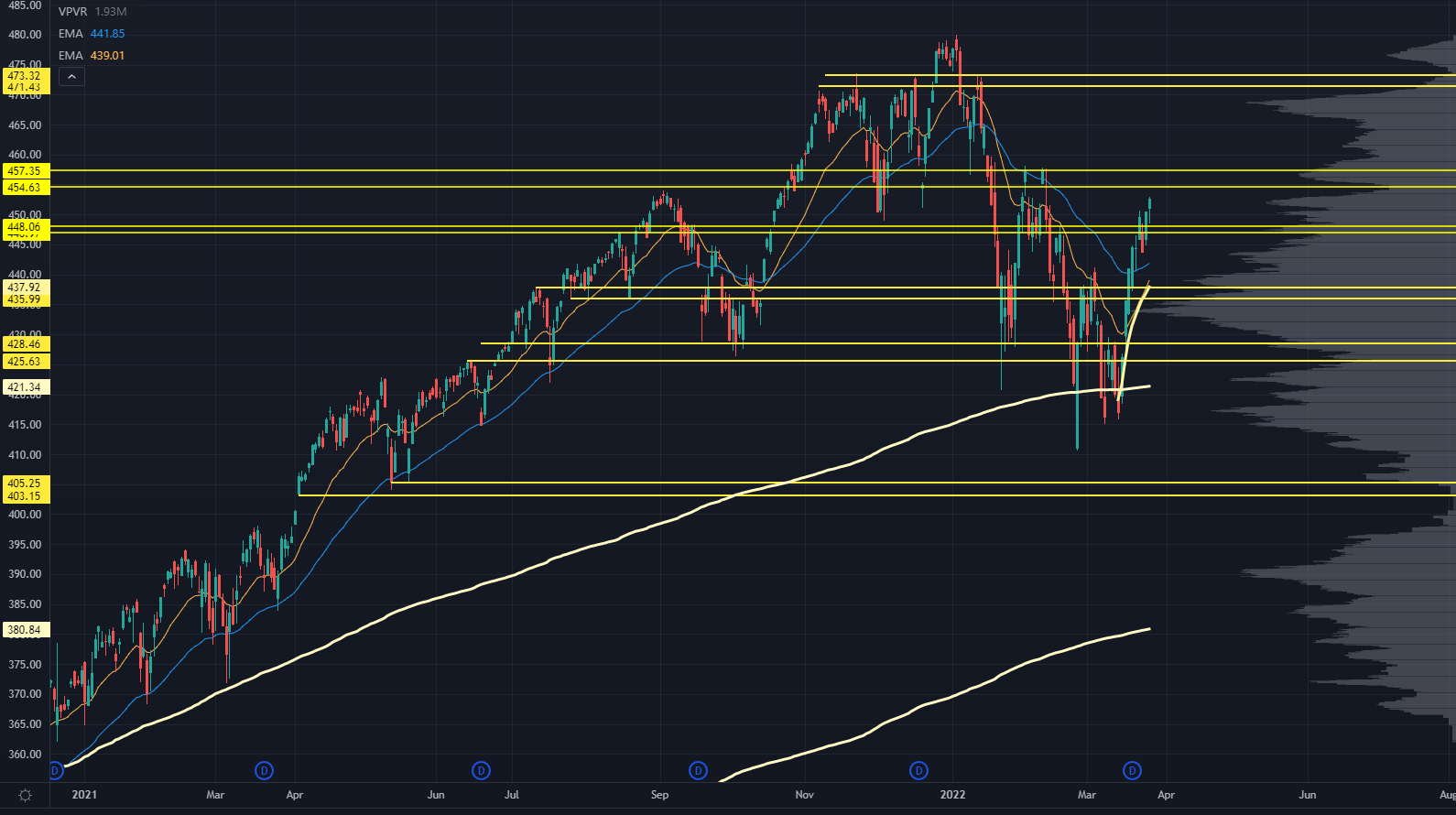 It’s very possible that the past two months have churned and chopped enough weak hands out of the market. And boy, the market sure loves to rip higher with as few participants on board.

This rally is not evenly distributed– smallcaps and biotech traded sideways while the mega-cap tech stocks helped drive this market higher.

We are, however, coming into a massive level. It’s the prior resistance from the highs from both Feb ’22 and Sep ’21. It’s a very large LVN, meaning you may not find a ton of liquidity there and could see a rejection.

Given the speed of the move, it’s reasonable that the market takes a breather. My only conditional on that bearish thesis is that the lack of market liquidity can run this thing higher than what most people expect.

And that doesn’t mean that we need a crash to fully reset this. We saw a similar kind of rally in Sep-Oct 2021, and it took a full month before we found sellers again. Granted, we have a lot more overhead supply that will put a damper on things, yet keep this as a warning that shorting new highs every single day has blown out many traders recently.

For now, expect that 454-457 is a big level to contend with, and expect some selling to show up as we head into that. To the downside, I’m simply focusing on the swing AVWAP from the lows right before the market took off. If it can manage to hold that, then structure will have significantly improved.

One more note here, and this is back to the structure of the market. For now, it’s reasonable to say that this is a kind of bear market rally. We saw a 14% pullback, and commodity prices affect the Fed narrative which can lead to more risk adjustments.

With that uncertainty backdrop, we probably won’t have a straight march higher. Expect a lot more range and higher reversion tendencies as we head into the summer. 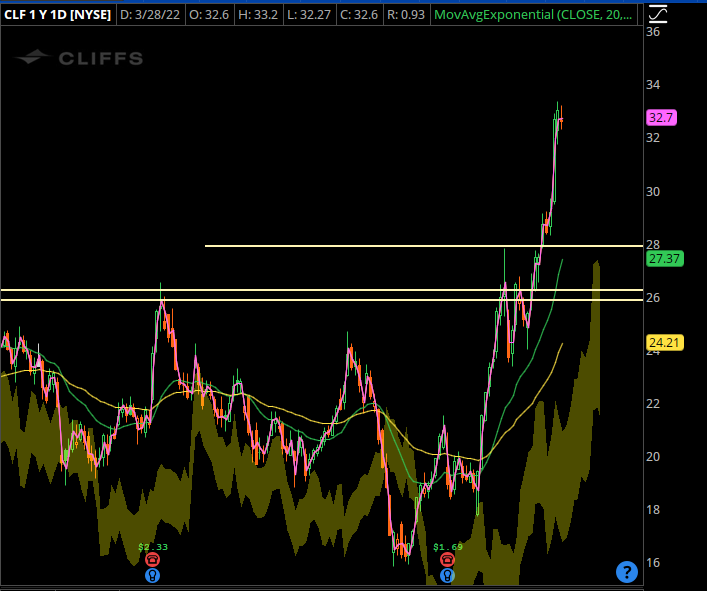 CLF is one of those commodity names that I completely missed the boat on with this breakout. It’s parabolic, and due for a reset, so we will plan to trade against the first pullback that we can get. The stock is very volatile, yet given the kind of the move we need to shift our expectations for a bit more of a shallow dip than a massive roundtrip from these levels. 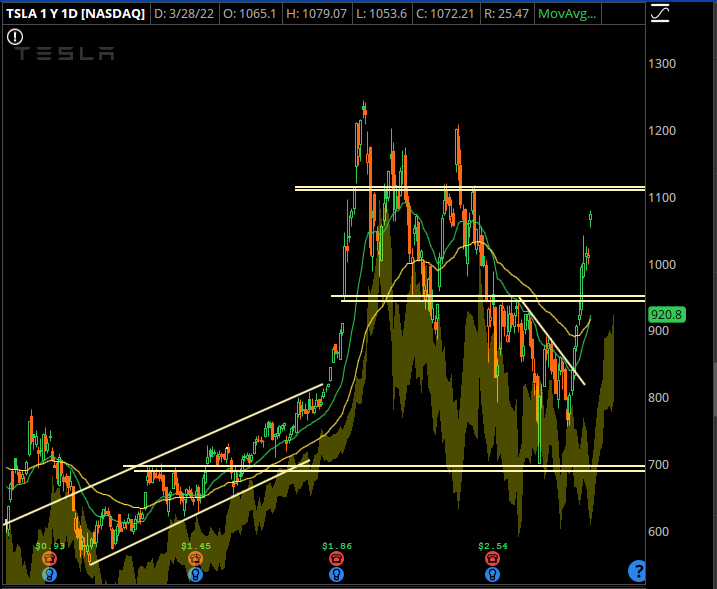 TSLA is catching some upside movement on the possibility of (another) stock split. This is not fundamental news to the company, and is more related to the structural nature of the stock.

The last time the stock had a split up on deck, the stock ran higher into the split before having a hard selloff. Given the overhead supply as we head into 1100, I think the traders who are anticipating a similar move will end up stuck holding the bag before we see a hard reversion to retest some key levels. I could be wrong and this thing skyrockets to 1300, but this isn’t 2021.

We are looking for a full reset to test the key internal pivot level, the rising 20/50 ema, and our anticipated pullback level. 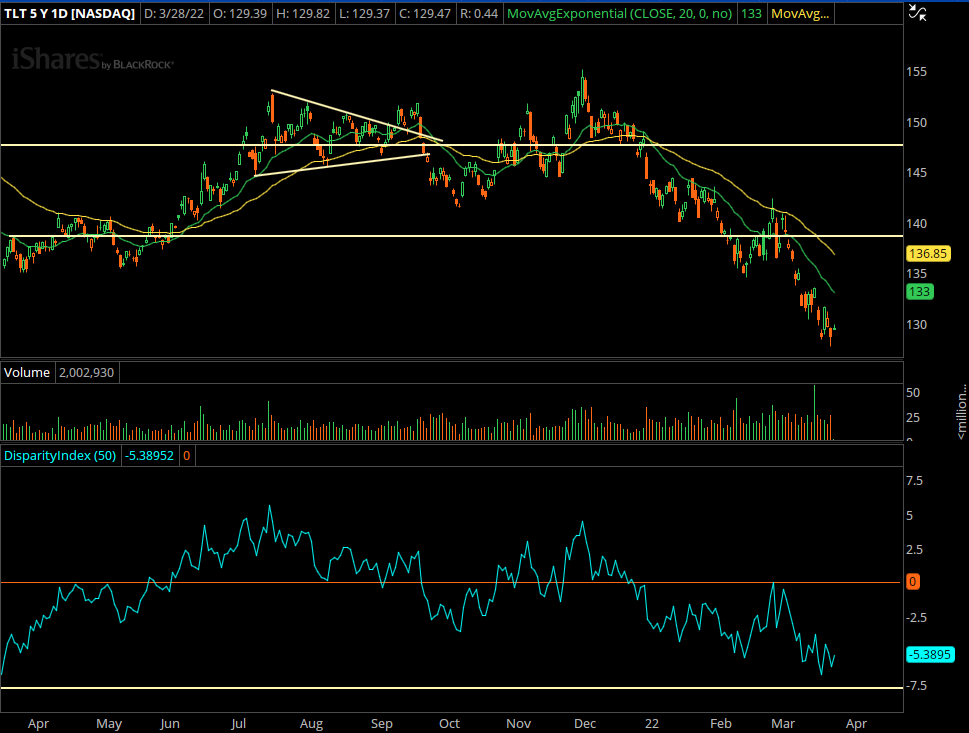 The long bond has been absolutely destroyed as the spectre of inflation and the Fed’s response to it has led to a hard selloff. TLT is currently 5.3% under its 50 EMA, which doesn’t happen very often. We have seen lower “stretches,” with the most recent time being in Feb 2021 which marked the cycle low in rates. On the macro side, we are approaching the point where you’ve got too many market participants leaning in the same direction as they are all seeing the spikes in commodity prices and continued uncertainty from the Fed.

I’m willing to step in front of this given the statistical stretch on this. Note the duration on these spreads, we are going out to May on this one to give us some more wiggle room. 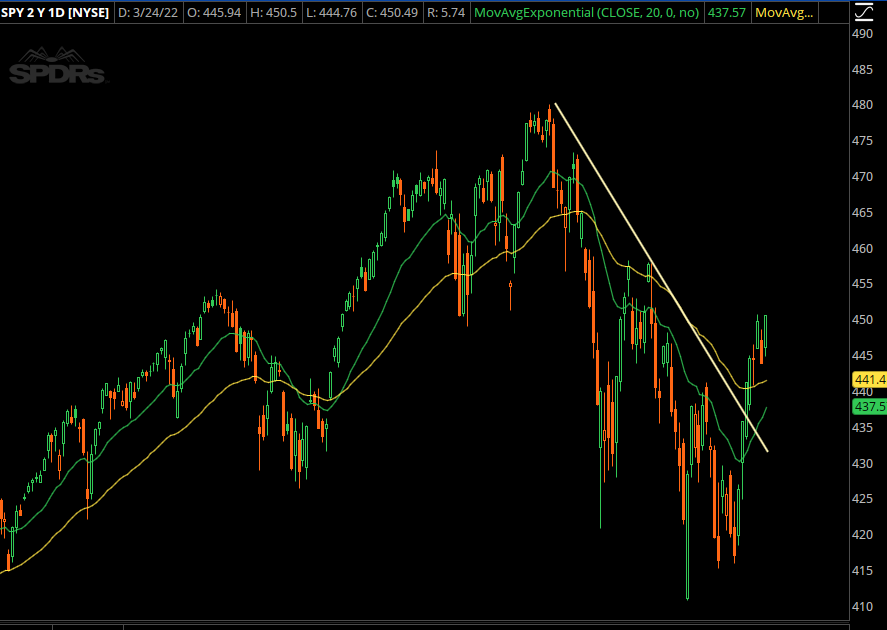 Markets are seeing a string of strong upside movement after going through an absolute grindhouse during the first part of March.

I do think much of this had to do with the VIX staying sticky above 30, and once that dam broke it was a “tail wagging the dog” scenario where a selloff in volatility products led to a rip in the market.

(It also helped that Barclay’s halted new issuance of VXX units. More on that another day.)

The S&P is coming into an important resistance level around 450 – 455. That would be the logical area for a slowdown in this move. That will also coincide with some big levels in AAPL, as large cap tech has been driving a good chunk of this move.

The best plays continue to be in commodity plays. The names we are watching are pretty extended to the upside, and if we see a drop in treasury yields (very possible) then it will put the brakes on the commodity trade for a bit. We will be anticipating where those levels are. 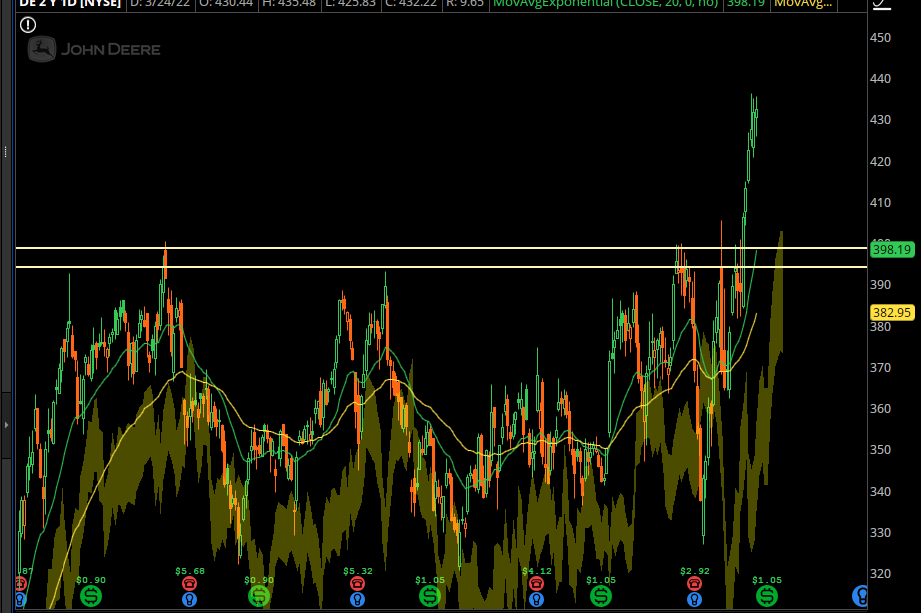 Monster run in Deere, and it is overbought. It’s possible that the stock has a kind of “high and tight” bull flag pattern, but we have seen some hard rug pulls in the name. We want to anticipate the attempt at a pullback to breakout level. 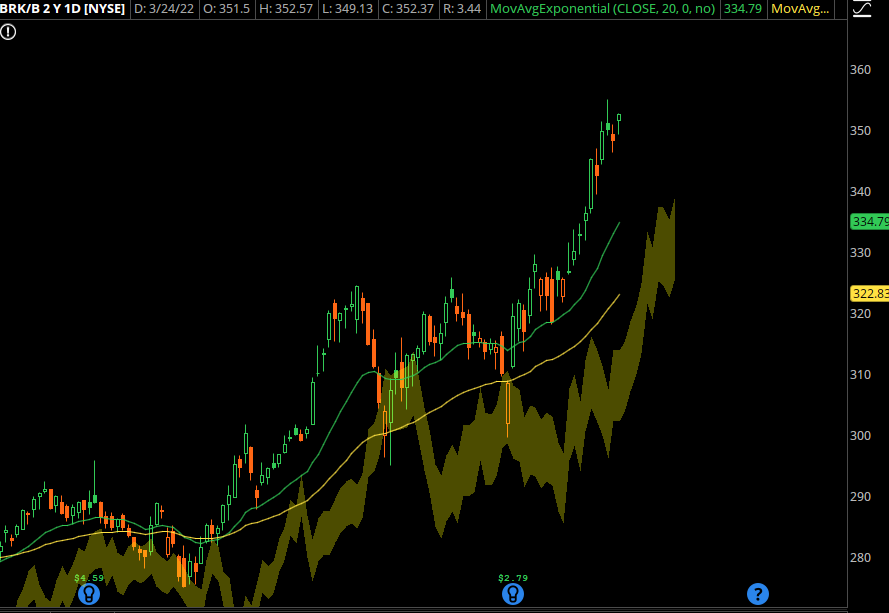 Berkshire has been on a tear as their portfolio companies like BNSF and OXY have had some stellar moves. It’s overbought, but will be the first pullback after a move to new highs. We will be targeting the lower edge of the acceleration bar. 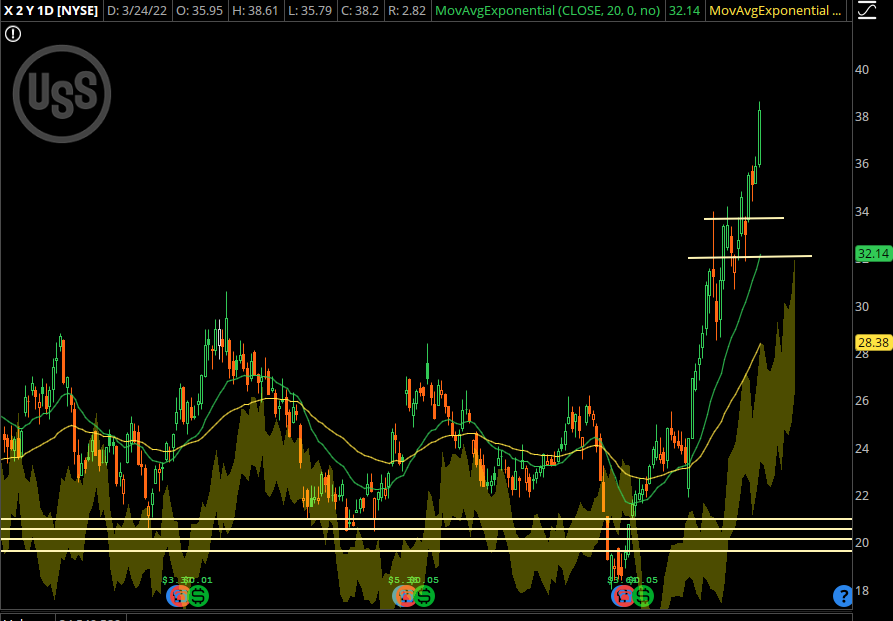 Another commodity play that’s an absolute monster higher. We can start looking at this to the short side, but we don’t want to step in front of that freight train just yet.

We’re going to target the range that was put in through March, as that is a reasonable area to expect some buyers to step up. I know that would be a nasty selloff, but it’s the best spot for us to trade against. If it doesn’t hit, then we’ll look for another setup in a few weeks. 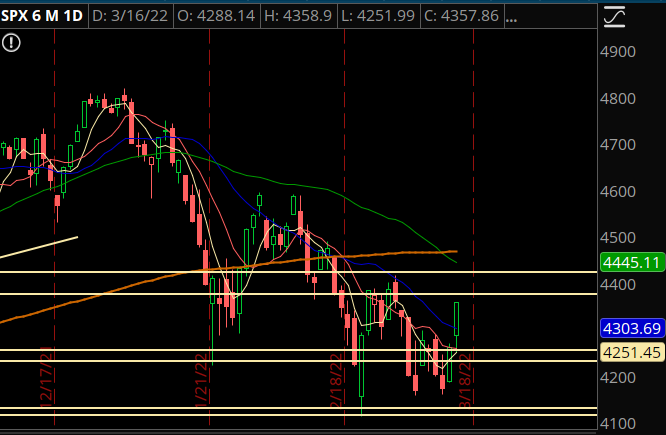 We got some better signalling from the Fed today, which led to a nasty squeeze higher. If this sticks, then we can start to consider more of a bottoming process in the works. It may not be the exact bottom, and we could always see something come out of Europe that changes the math, yet for now this is a decent change in character.

It’s not just about the strength and breadth of the rally– it’s ‘how the market traded over the past week where we saw much improved liquidity, and it was simply more difficult to find any follow-through to the downside.

Our primary focus will still be on relative strength stocks. 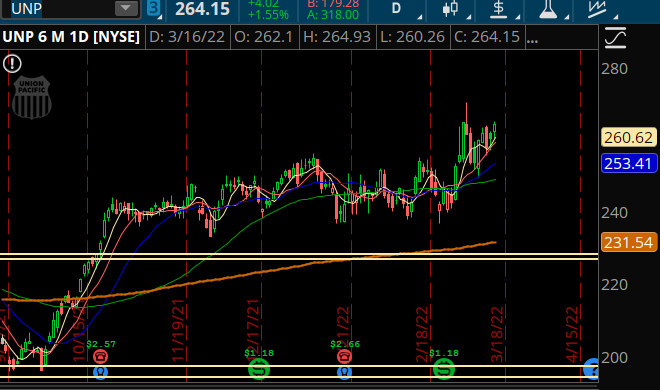 UNP has been a rockstar during this market correction, and it appears that this consolidation pattern is sticking. I like initiating some spreads into this strength. 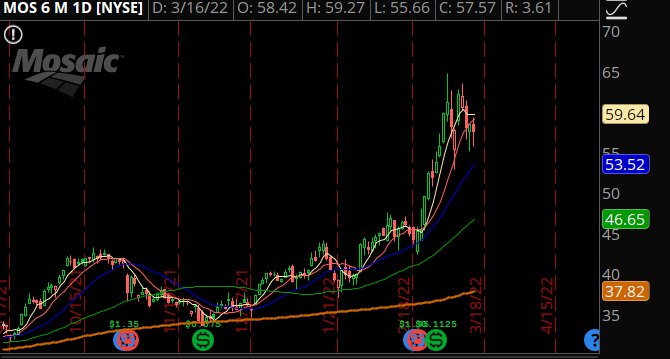 There’s a very real chance that this just starts to base out and head higher. Yet I’d really like to see an undercut of those lows from a few weeks ago to really run the stops out. 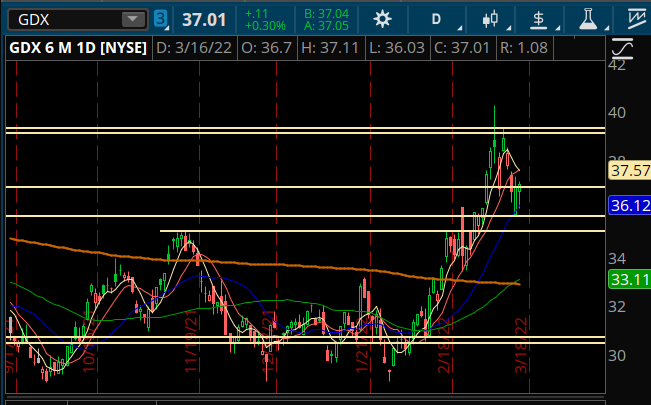 Very similar concept as MOS, yes it could just run higher, but given some of the post-Fed movements, we could easily see a push and collect the November highs back in the mid 30s.

It’s an absolute grindhouse out there right now. We’re seeing overnight gaps based on troop movements in Europe and inflation data.

We’ve got some levels just under price that are holding, but until we see narrative resolution it’s possible we just keep seeing these false starts and failed breakdowns.

We’re going to focus on two logistics plays and a large bank coming into key support. 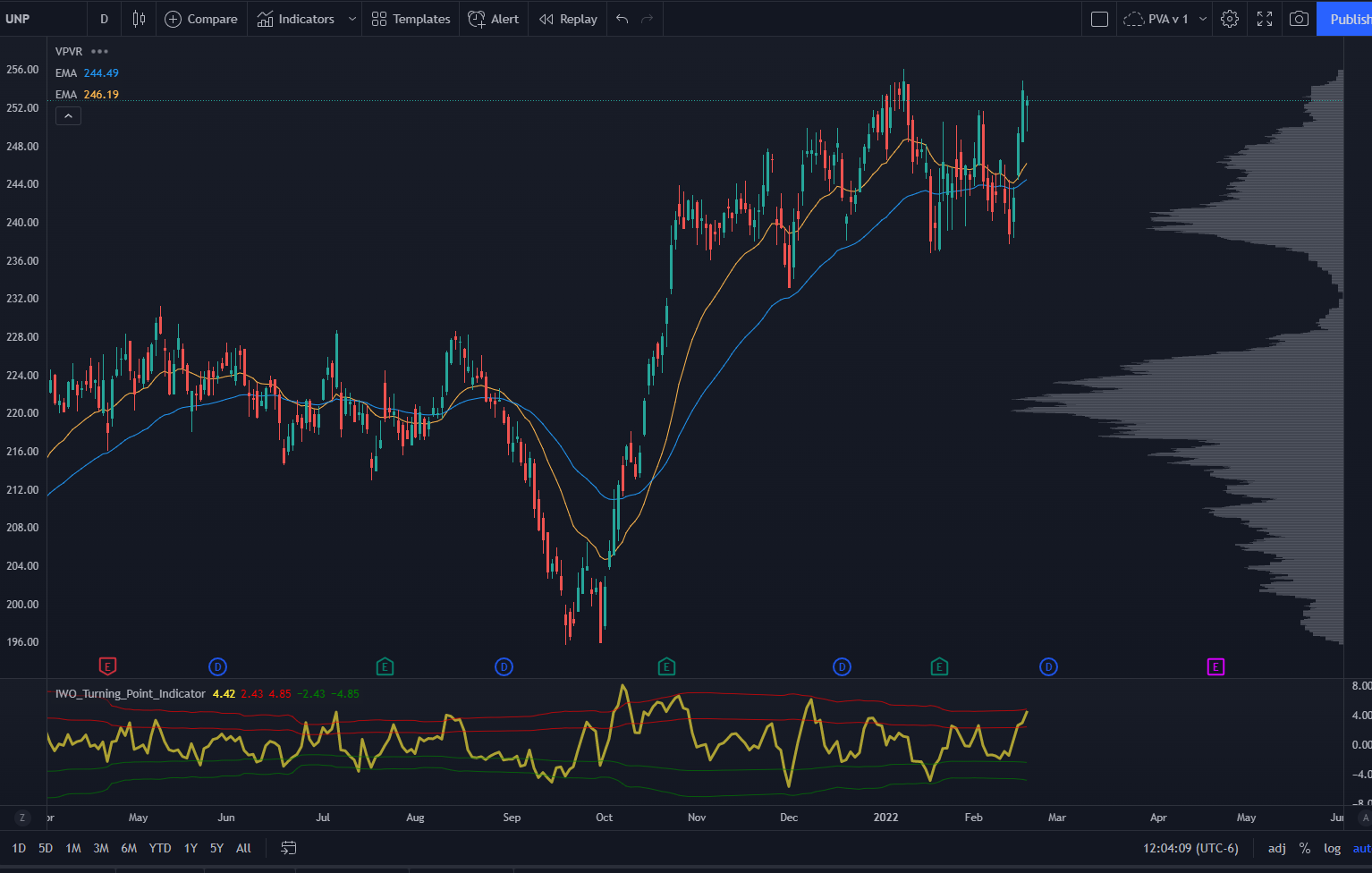 This one is looking like it is on its way to breakout. If it doesn’t, then I’m looking for a move to the support levels as a place to get long. 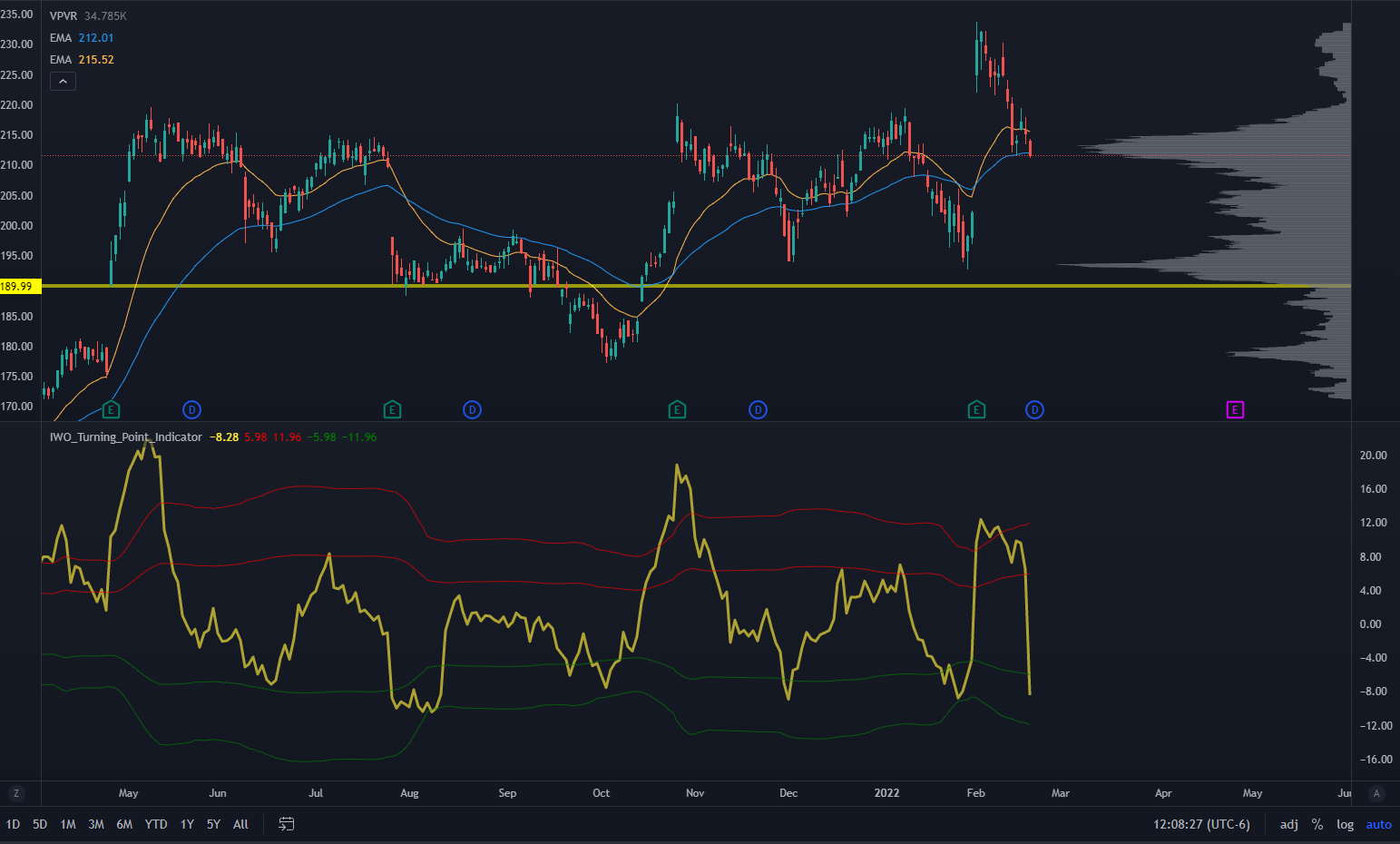 We’re 12 days out from the gap up on earnings, and the stock has faded back to its prior resistance level. It’s also at a significant level on our TPI in that 12 day window. 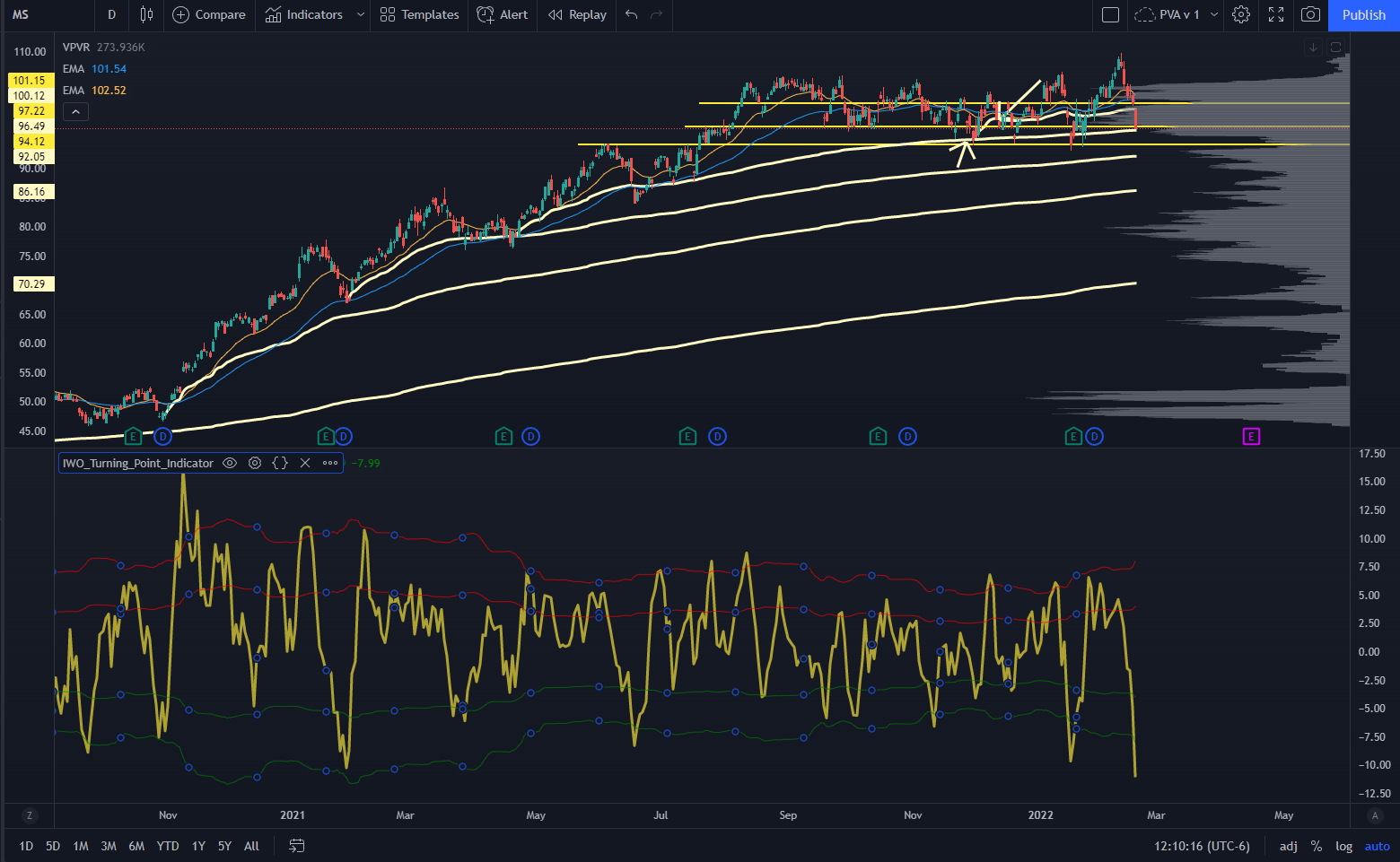 After failing to breakout, MS is now back at the other end of its trading range. It’s down over 10% in a 6 day window.

To put that in context, the worst 20 day window selloff was 12%. Given the overall trend is up and its coming into some key technical levels, this offers a solid edge.